The responsibilities and time dedicated to the home and to the care of dependents, without receiving any remuneration, notably restricts the possibility of women to have their own income, to seek options in the labor market, to participate fully in politics and society, at the same time that it relegates them from the social protection essential for the autonomous satisfaction of their needs

In an ordinary workweek, anyone completes a maximum of 40 hours. However, in practice, you – like many other Costa Ricans – are likely to exceed that number. In an extreme case, can you imagine spending more than double these hours per week at your job, without being economically recognized for its worth?

Although it may seem crazy, in Costa Rica there are women who have hours of unpaid domestic work as strenuous as the one described. They spend almost one hundred hours a week cooking, cleaning, washing, running errands, taking care of children, family members and any other household job without receiving the merit that their work means to sustain the economy of their own home and of the entire country.

These exhausting cases are registered primarily in rural areas but show how the home responsibilities and caring of people are resting heavily on the shoulders of women.

A data investigation done by La Data Cuenta found, at least, twenty-one women living under these tiring circumstances in the country. These cases emerged as part of an analysis run over the database of the National Survey of Time Use, carried out by the National Institute of Statistics and Censuses, (INEC), in 2017.

During the application of the National Survey of Time Use were interviewed 4,111 women. One third said unpaid domestic work consumes them from 48 to 95 hours per week, regardless of whether they have a job outside the home.

The Survey also consulted 3,139 men, only the 1.5% of them assured to work at home more than 48 hours per week, which shows the unequal distribution of domestic and care tasks because of entrenched gender stereotypes.

What is unpaid domestic work? It is all the chores that are done at home (washing, cooking, ironing, cleaning). It also includes the purchases, procedures and payments involved in managing the home and, finally, taking care of children (taking them to school, helping them with homework) and caring for the elderly and / or the sick. For all these tasks no direct economic retribution is received. For centuries, these tasks have been seen as «no work» when the truth is they are vital that runs the economy of all countries. They even subsidize it because all this unpaid care gives well-being to the public and private workforce.

The most forceful conclusion of the data analysis made by La Data Cuenta to the Survey database evidence that, on average, in Costa Rica women spend twice as much time than men on household chores: 37 hours versus sixteen, respectively. Once again: It does not matter whether they have a paid job outside the home.

However, this reality changes when the data is disaggregated and analyzed according to area of residence, marital status, or level of education. Then, other gender imbalances emerge, such as the one that reflects women living in rural areas – or the married ones- have longer working hours, as shown in the graphs below. 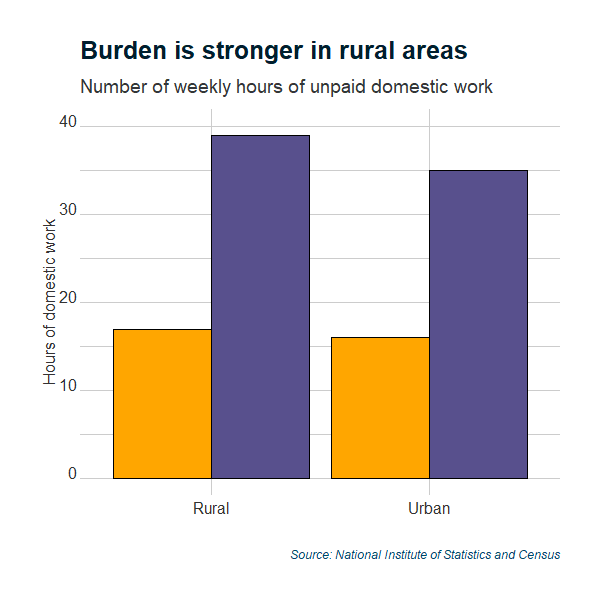 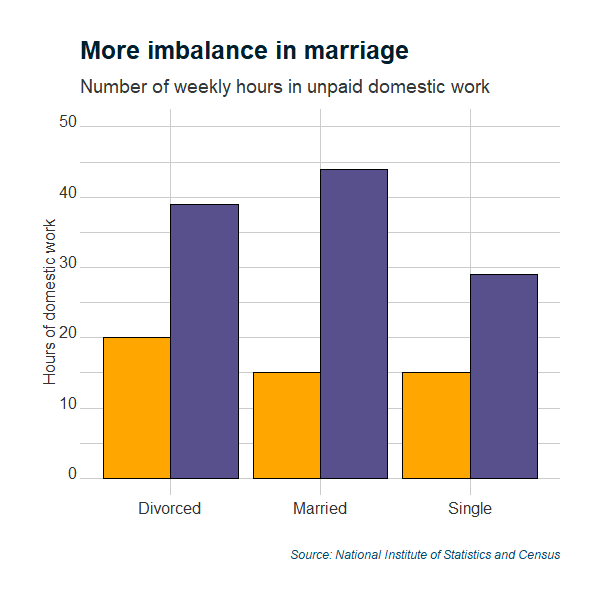 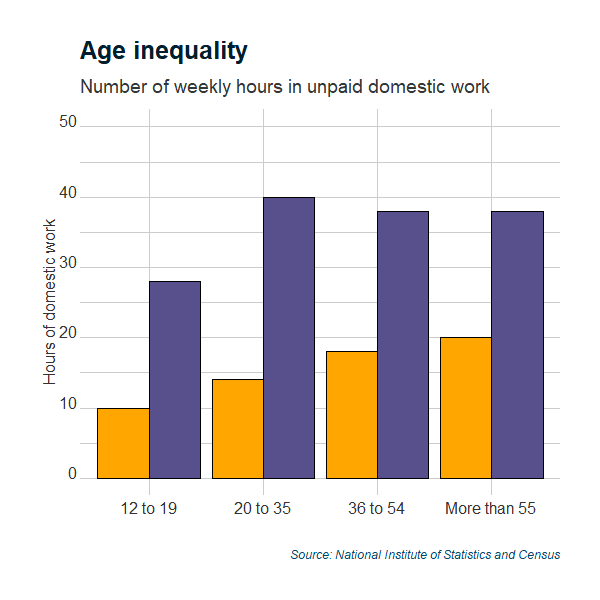 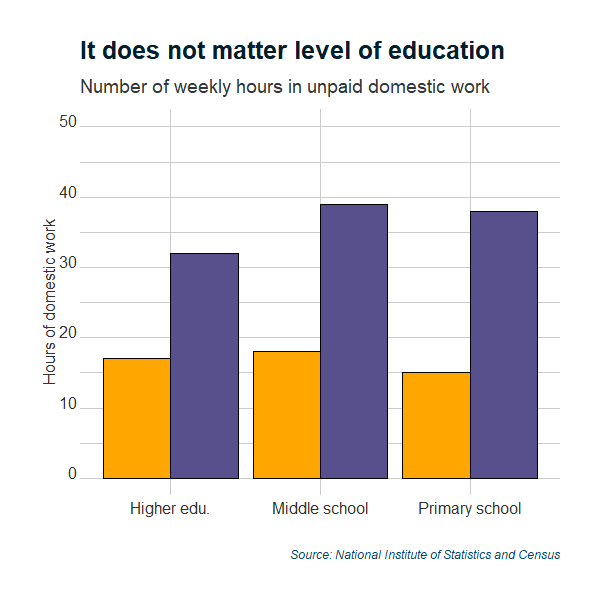 For rural women it is terrible, because in many cases they also have the burden of helping men in agricultural fields. But, at the same time, they are doing all the household chores. There is no escape for them because husbands continue to flee from doing domestic work"

The overload of domestic work that weighs on married women or women in de facto relationships is not exclusive to Costa Rica but a pattern in Latin America, which reflects how entrenched the patriarchal patterns of gender roles are, according to a report by the Economic Commission for America Latin and the Caribbean (ECLAC).

The ECLAC investigation highlights that, once women are separated or divorced, the burden of housework decreases significantly. In contrast, it increases for men who must take care of themselves as their partner is no longer at home.

On the other hand, both, the Costa Rican and ECLAC data, allow us to deduce that the gender gaps regarding care of home and dependents are still strong among the younger population. For example, on average, Costa Rican women -between the ages of 12 and 19- spend 28 hours a week in unpaid domestic work versus ten of their male counterparts.

Young men are still so far out of equal participation and believing that women are here to be exploited in home or at formal works. The cultural, economic, and ideological system continues to operate to tell women that they should work outside, but also take care of the home"

Weight is worse for young women in rural areas

The analysis of the database of the National Survey of Time Use in Costa Rica also allowed the construction of a series of 171 profiles of time use in unpaid domestic work according to variables of sex, age, level of education, area of residence and marital status of the people surveyed.

In this way, it was detected that the women who spend the most time on housework without pay are those in rural areas, divorced, between 20 and 35 years old and without completing primary school. On average, they spend 57 hours a week on household chores.

Meanwhile, the men who do the most domestic chores -39 hours a week- are the divorced, living in rural areas, with high school and between 20 and 35 years of age.

The enormous consequences of COVID19

At this point it is necessary to warn that the numbers of weekly unpaid domestic work presented in this investigation could have been increased for women due to the confinement caused by the Covid-19 pandemic.

Although no formal national survey on this regard has been done yet, a study prepared for the Institute of Psychological Research (IIP) of the University of Costa Rica (UCR) evidenced that women in urban areas of the country are facing a triple workday due to Covid-19. Currently, they are working from home, also are doing household chores and home schooling.

«During the pandemic, care and education tasks are being assumed by women. They have work outside, work at home, the responsibility of taking care of their children and now they have a school at home. The time demand for women has gone up, significantly», said Mónica Salazar Villanea, researcher at UCR.

According to the United Nations, the overwhelming burden of domestic tasks denotes a great gender inequality that negatively impacts four essential areas of women’s development:

More difficulties to get a job outside home

More obstacles to advance in educational and employment careers.

Greater participation in informal work, where they have more control of their time, but without social protection.

Although there are still people who consider that domestic work and caregiving «are not a job», the truth is that without all those unpaid works of women it would be impossible for the country to create the wealth and production that the Central Bank includes every year in its accounting of the Gross Domestic Product.

Therefore, based on the results of the National Survey of Time Use of the INEC, the Central Bank created a new national account that makes visible the economic value of unpaid domestic work. The institution did it so to comply with a Law approved in 2015, within the framework of a series of international commitments to which Costa Rica is a signatory, such as the Convention on the Elimination of All Forms of Discrimination against Women, the Beijing Platform for Action, the Brasilia Consensus, among others.

If women's unpaid domestic work
were an account within the GDP,
it would be the most important

In one year, the unpaid domestic work that women do at home generate a wealth equivalent to twice that produced by all Costa Rican commerce. The monetary value of all the hours invested in cooking, washing, ironing, keeping the house clean, shopping, keeping payments up to date, taking care of children, the elderly and the sick is more than 5.9 billion colones (almost US $ 10 billion).

By that amount, if women’s unpaid domestic work were an account within the country’s Gross Domestic Product, it would be the most important one. However, it is not part of this accounting, which only considers the final value of the production of goods and services destined for the market.

The astronomical figure of the contribution of unpaid domestic work by women emerged after an analysis of data made by La Data Cuenta to the Account where the Central Bank of Costa Rica records this information.

Until just four years ago, the economic contribution of women´s unpaid domestic work was invisible, it had never been quantified. However, by mandate of law, the Central Bank began to calculate the contribution,which equates to almost a quarter of GDP in 2020.

This lack of measurement was not unique to Costa Rica. Historically, countries -based on a patriarchal culture of gender inequalities- did not consider it relevant to assign a monetary value to household and care tasks, which are primarily entrusted to women.

This contributed to spreading the notion that these tasks are not a job in themselves although, for decades, the unpaid domestic work of women has subsidized the well-being that public and private employees needed to focus on moving the country’s visible economy. Giving them: clean home and clothes, food, and childcare, among other benefits.

Until now, the invisible and exhausting weight of unpaid domestic work on women’s shoulders has had terrible consequences, relegating them from the world of paid work and opportunities to develop as individuals, a vicious cycle that perpetuates gender stereotypes.

Half of Costa Ricans, for example, depend exclusively on the income of their partners and four out of five said that it is due to the obligation to dedicate themselves to domestic work. Likewise, the net labor participation rate for women is only 50%. Half of those who could work for a gain are not doing so.

«Redistributing these tasks is critical, it implies rethinking and remaking the relationships in our society. The States have a great task, to ensure the good quality of public childcare services, as well as to promote cultural changes so that, through policy is to encourage men and women to assume responsibilities more equitably. Countries need to get involved and not say that this is a private matter that must be resolved in families, «says Shahra Razavi, Head of Research and Data Analysis at UN Women.

Since the beginning of this century, the pressure has grown over the countries to economically demonstrate the contribution of women through unpaid domestic work. It is recognized that without the marathon number of hours invested in these tasks, no country would function properly. As a matter of justice, equity policies are needed to be promoted to better distribute the burdens between men and women in the home. This is a light at the end of the tunnel

Women's unpaid work bears the cost of care that sustains families, supports economies, and often makes up for gaps in social services. However, it is seldom recognized as "work." To accelerate progress in the economic empowerment of women, policies are urgently needed that offer services, social protections and basic infrastructure, that promote the distribution of care and domestic work between women and men, and that allow the creation of more paid jobs in the care economy"

(The articles in La Data Cuenta are the property of their author, Hassel Fallas. If you wish to reproduce or refer to them, please cite the original source and link the link to its publication).